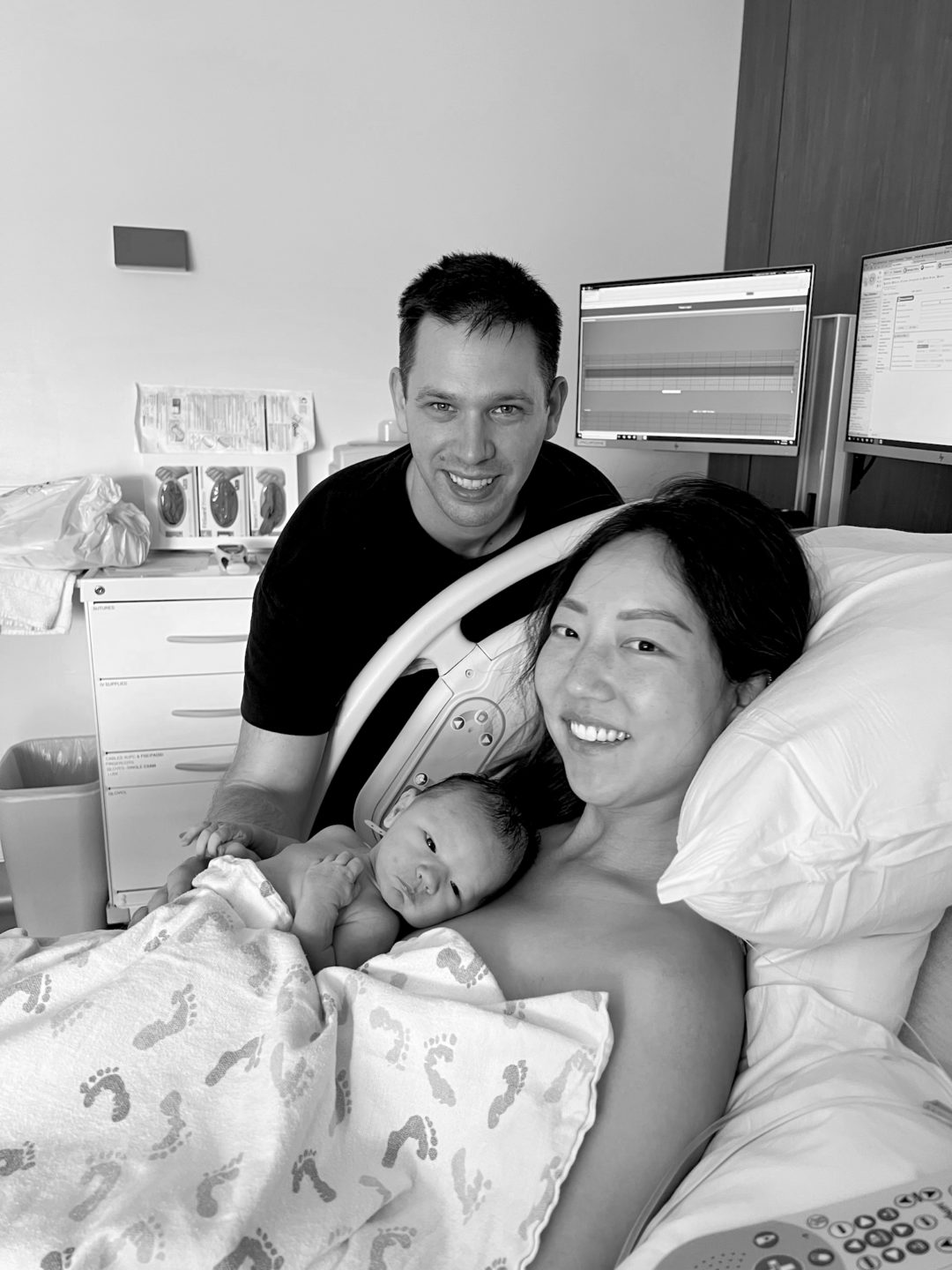 It all started 7PM Thursday, June 2 (kind of). After I got home from walking around the park I started experiencing sharp cramps above my belly. By this point I experienced enough Braxton Hicks contractions to know this was different. The cramps were painful and lasted longer but eventually went away after an hour so I thought it was false labor. Looking back this is when early labor started.

When Sunday rolled around I had a burst of energy and did sooo much stuff around the house. I was rearranging rooms, shot content, and had a friend come over. I remember being in the backyard and feeling SO uncomfortable with how low baby was and just wanting to sit. Josh on the other hand was cooking lasagna (per my request) for dinner and to freeze so we’d have food stashed after baby’s arrival. The timing could not have been more perfect, because I went into labor that following night.

On Monday, 6/6 12:20AM as I was getting ready for bed I felt something come out. I rushed to the bathroom and my mucus plug dropped into the toilet. I told Josh what happened warning him labor was coming. He didn’t think anything of it since I kept getting on and off cramps that whole weekend so he tried to go to sleep.

THE START OF MY CONTRACTIONS

25-minutes later I started experiencing contractions 7-minutes apart, for 20-40-seconds long. Labor had officially begun. I tried to time them myself, but since the contractions got more painful I had Josh record them. For the first hour, my contractions were all over the place and never lasted longer then 45-seconds. I had Josh call the hospital and they told us to come once the contractions were 3-minutes apart, 60-seconds long. By 2:47AM (so 2-hours later) my contractions were 60-seconds long. I urged Josh to get everything ready to leave. The contractions got way more painful so I was on my knees on the floor, with my body bent over the bed and could barely move. While this was going on Gracie (my dog) was by my side and put her paw on my shoulder for reassurance. It was the cutest thing and I kept wondering if she knew what was going on. I also texted my family since the plan was for my brother to come over when I went into labor to watch Gracie.

By the time we got ready to leave it was 4AM. Right when I stepped into the car my water broke and gushed out. Josh asked if I wanted to go back in the house and I said no, grabbed napkins from the glove compartment and shoved it in my pants telling him to quickly drive. The night drive to the hospital felt so surreal. I remember driving through San Francisco lit up thinking how beautiful and calm the city felt, while emotionally I felt the opposite. In a mad rush, in pain, anxious to get to the hospital.

When we arrived to the hospital Josh dropped me off at the front door. I grabbed my hospital bag and told the receptionist I was in labor while leaning against the wall for support. The contractions got way more intense, and were happening every 1 minute, lasting 60-seconds long. I was on the floor at this point breathing through each contraction. Eventually a nurse came with a wheelchair and wheel-chaired me away to triage. I was 2cm dilated and 99% effaced at this point.

While I was in triage Josh was stuck in the waiting room. In triage they had me change into a hospital gown, asked me a series of questions, and stabbed me in 4 different areas with a needle for my IV while I was having contractions every minute. She’d stab me, I’d say “ow” and she’d say “that’s weird the needle won’t go in, your veins are so small” and continued to stab me with no luck while mentioning maybe she should use a smaller needle… but she didn’t. It wasn’t until several minutes of her failing and multiple unsuccessful stabs that another nurse came in and told her to use a smaller needle since it clearly wasn’t working and I was in pain. The minute she got the smaller needle it inserted seamlessly. This was the most annoying part of my labor.

Since the baby never turned anterior which is the optimal position for birth I had back labor. With each contraction my lower back was on fire since the baby’s skull pushed against it. The back pain was more painful than the contraction itself. During the contractions a nurse would use her hand to push pressure onto my lower back which helped. The pressure had to be applied in a very specific spot to relive pain. When Josh finally got admitted to triage 2-hours later the nurse showed him how to apply pressure on my back but he wasn’t able to do it properly. I remember telling him that he was doing it wrong and he wasn’t helping lol.

Around 6:30AM I finally got wheel-chaired from triage into the labor and delivery room. I was now 6cm dilated with contractions 1-minute apart lasting 1-minute long and I remember sweating in pain on the way there. It was such a struggle getting onto the bed through my constant intense contractions and back pain. My whole body trembled, I was sweating, my teeth were chattering and I had to close my eyes and breathe through each contraction. I always planned on getting an epidural so when the anesthesiologist came around 7AM it was a huge relief. Sometime during the epidural I got a reflex that felt like electricity and jolted. The anesthesiologist told me how important it was to not move so I used all my might to stay still through the pain of the contractions.

When the epidural finally hit, o-m-g it was night and day. The pain stopped and I felt so relaxed and at ease. Everything from the hip down was numb, so I had to use my arms to move positions (the nurses had me initially lay on my left, then on my right side).

After I got the epidural I was stuck at 7cm dilated. Every time I got a contraction the baby’s heart beat dropped since my contractions were deep and intense. Additionally my contractions weren’t consistent anymore. Since there was a risk I’d need an emergency-c section due to this, I got pitocin around 12pm to see if that would help. When the nurses came back at 2PM I magically got fully dilated and was ready to push. They kept the lights dimmed down and shined a spotlight on my vagina.

I started pushing at 2:15PM and it was the best and most rewarding part of the experience. I didn’t have a birth plan outside of the norm, except for one request: to use a mirror to push. Because of the epidural, I felt nearly no pain and just pressure. 1 nurse guided me through each contraction telling me when to push, while the midwife coached me through each push ready to catch the baby. Josh was by my side the whole time (he did not want to see anything down there which I don’t blame him for) also encouraging me. With each contraction I’d take deep breaths and use my core strength to do 3 strong pushes. In between contractions, I’d hold the baby in place to prevent him from going back in (kegal exercises helped me do this). The nurse and midwife were so impressed with my pushing that I felt super more motivated and excited. Adrenaline was pumping.

THE ARRIVAL OF BABY LUKE

After 50-minutes of pushing, baby boy entered the world with a soft cry. He came out with the umbilical cord wrapped around his neck so the midwife quickly cut it. I then realized this was probably why he never turned anterior, perhaps if he did the cord would have choked him. I remember during pregnancy a midwife telling me that the baby will do what they’re supposed to do to come out and now I firmly believe that.

When the baby came out they wiped him down and placed him on me for skin-to-skin. Josh took a video and I just look completely in shock. I remember thinking it felt like a real life doll got placed on me haha. His eyes were open and he was looking at me with soft whimpers. I was in complete awe and wonder looking back. Eventually his whimpers stopped as we just gazed into each others eyes.

Having gone through the experience, I have a whole different perspective on motherhood and respect moms tremendously. No amount of reading, watching videos, or talking about it with friends could have prepared me for the reality of it. It truly is something you have to go through to understand and it’s a beautiful, crazy process. I feel blessed to have had a positive birth story and a healthy baby boy. Every baby truly is a miracle. xoxo. 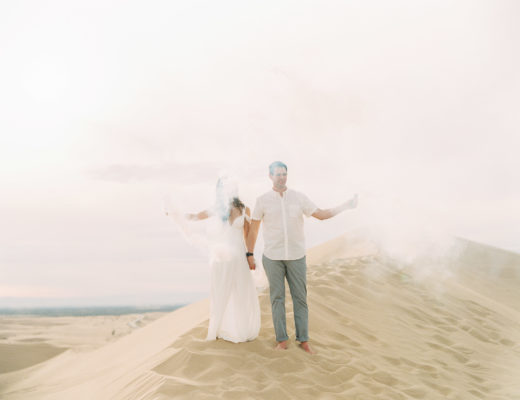 TIPS FOR AN EPIC ENGAGEMENT PHOTOSHOOT 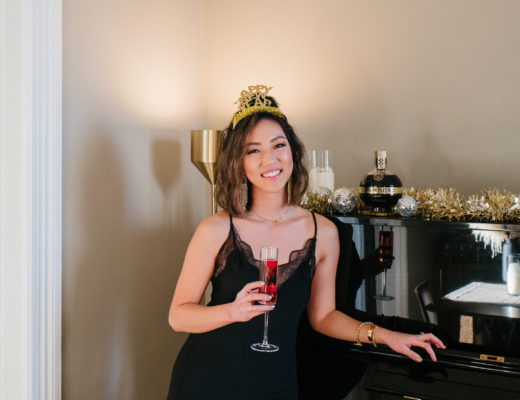 RINGING IN 2021 WITH CHAMBORD 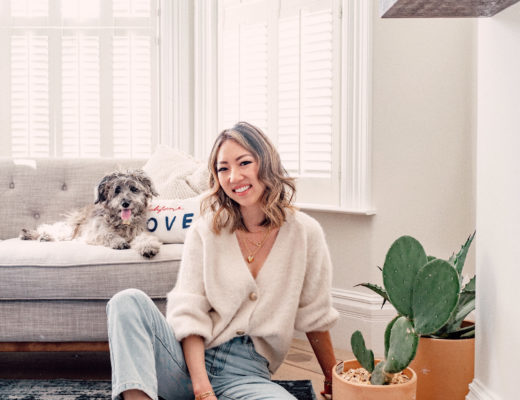 MY NEW DAILY ROUTINE WITH SHELTER IN PLACE

Bonus points if you know what movie this audio is

Ladies get out your leggings, sweaters, uggs, puff